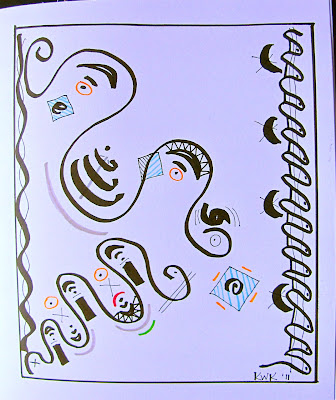 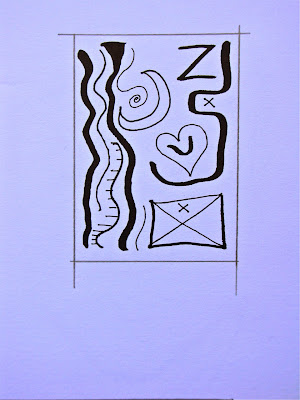 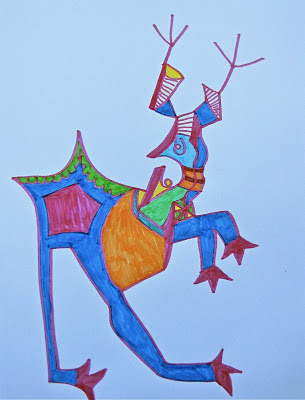 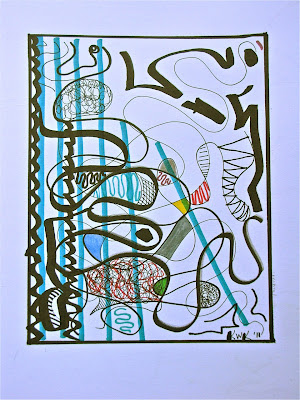 Just got some new markers and am trying to tempt myself back towards the visual arts.  These images are pretty sloppy because I couldn't get the right white balance in my photo editing program (which is very simplistic and all I know how to use...sort of).  And so white has turned into purple!  Nonetheless, you can get a feel for what I've been working on the last couple of days.  It's all about experimental play and yet, in some ways, it's more serious because I am stopping, assessing, making a new mark all very gradually.  Invariably, I'm scared to make the very first mark.  Scared because I don't have a working plan of action, so then I jump into it.  All I know is that I want to vary the marks on the page and work intuitively.
Posted by Kate Waters Kiernan at 4:24 PM 2 comments:

Email ThisBlogThis!Share to TwitterShare to FacebookShare to Pinterest
Labels: artwork

This is the first day in about three weeks that I've had free to slow the pace down.  For the most part, I have not kept up with my online friends.  I apologize for that, but I can only seem to focus on one thing at a time.  Also, before I have to do something with my family I need half a week to a week to prepare and then afterwards I need a half a week to a week to recover.  That's the nature of mental illness for many people I'm afraid.  I can appear relatively normal with my family for a week or two, but then I need to withdraw back into my solitary space.

This was probably the last trip my parents will make to visit Rob and me in New York.  From now on we will visit them only.  My father turned 85 this trip and my mother is 83 and they are visibly slowing down.  The day before I picked them up at the airport my brother had a small fire in his house; he fell trying to put it out and hurt himself and so he didn't come with me to pick up our parents.  It was very good to see them and a day and a half later to see my uncle.  My uncle recently turned 80 and yet he drove from Chicago to Western New York in a couple of days.  I thought he looked great, more energetic than my parents.  He is my mother's younger brother and she hadn't seen him in six years or so.  Despite living a long distance away from each other, they love each other and keep in touch by phone, but, as my mother has often said to me, it's not the same as seeing a loved one in person.

I arranged for my parents and uncle to stay in a B&B nearby.  It was only after a day or two of them staying there that I heard from my family that the owners were conservative Christian Republicans.  My parents and uncle are staunch liberal Democrats and confirmed atheists to boot and so it was a bit awkward for them living in such close proximity to their hosts.  Each side was certainly polite, even friendly, but my family had to restrain themselves and this made them uncomfortable.  Nonetheless, the house they stayed in was nice and safe and they didn't complain too much to me.

I discovered quickly that I had over planned the trip.  I was anxious and eager to please my mother in particular.  Both she and my father are great planners, but this time they realized that they didn't have the energy to do as much as I had anticipated.  And my uncle had the awkward responsibility of following my car with his while transporting my parents while I drove my brother because we couldn't all fit in the same small car.  And then on the birthday day (my brother was born on my father's birthday) as we were beginning the 45 minutes drive to a state park to have a nice lunch at a restaurant in an inn there, my "service engine soon" light came on.  Because we were an hour early, my uncle and I drove to the nearest service station.  It was lunch time, but the owner said that as long as the light wasn't flashing I could still drive the car to the restaurant and back.  And so I did.  The next morning I drove my car with my uncle following to my usual repair shop and dropped off my car.  It only needed a new sensor, but the part was expensive.  So I thought the car was good to go, but several days later, when we had driven to Ithaca, New York, an hour and forty minutes away to have lunch at a Thai restaurant and go to the theater there I encountered another car problem.

It was after we had eaten and after we had finished watching the play that when I tried to pull out in the parking lot, I found I could only move a couple of inches and when I did it made a terrible sound.  I immediately got out of the car and saw that the front driver's side tire was totally flat, but it didn't feel like a normal flat because normally you can still move the car a bit and I couldn't.  I sent my uncle and parents home and stayed with my brother after calling triple A to get a tow nearly 100 miles back to home territory.  Luckily I had gotten triple A plus which covers the cost of a tow up to 100 miles.  The tow truck came in an hour.  The man diagnosed the problem right away, said part of a coil in the front of the car had cracked, broken and sprung into the tire.  My brother and I quickly realized that we had averted serious injury, even death: if we had been driving at 65 miles an hour on the highway hours earlier with my uncle following close behind me who knows what might have happened to all of us?  And so, despite the inconvenience we were very grateful.

My uncle stayed an extra day and drove my parents to the airport and then headed back to Chicago while I had the work done on my car.  I prayed that they all get home safely and as it turns out, they did.  So the visit was a mixed bag, some good days and times and some not so good.  Last year, when my parents stayed at my house, we had a better time, were somewhat closer to each other than this visit.  Still generally speaking it went okay and I was very happy to see them all and spend a little over a week with them.

So here I am back to being home alone and I'm relieved, but it will still take me a couple more days to get adjusted.  A great thing that happened while my family visited was that I got a long letter from a woman I've been wanting to be friends with for several years.  She was responding to a three page type written letter that I sent to her.  She said she really enjoyed my letter and went on to write candidly to me about a few things in her life.  What's particularly cool about this woman is that she is not only a very interesting, individualistic person, but she lives close by.  In her letter she offered to do some work for me fixing my cat pen fencing so that my cats can finally go outside.  My friend Richard created a wonderful cat pen, but cut through the fence months ago to do some work on the back of the house and never got around to fixing it.  Right now he is very busy.  So I'm gearing up to ask this woman to come and visit me.  And I hesitate, not because I have any reservations about this interesting person, but because I have reservations about myself.  I'm so self protective that I don't often take chances.  Still, now is a good time to invite her over because my house is in moderately good order due to my family's visit.  Normally, I used my messy house as an excuse not to have anyone over, but right now I don't want to do that.  This woman is a private person with only a few close friends and I'm finding that I would like to become one of those friends.  So my next order of business is to write a good, long letter back to her.  I'm looking forward to doing that.
Posted by Kate Waters Kiernan at 2:34 PM 3 comments: