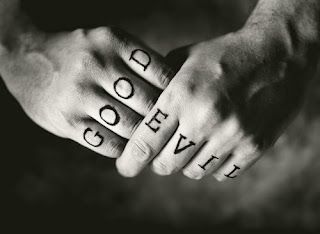 We pair good with evil as if they were opposites.  They are not.  The opposite of good is bad.  The opposite of evil is angelic.  We human animals are in the realm of good and bad.  The way I translate the words good and bad are good = healthy and bad = unhealthy.   Angelic and Evil are in the realm of the supernatural, which we are not.  And yet some of us are quick to label themselves and others "evil", to attribute a supernatural quality to the destructive acts they have committed.   We are not evil beings, we are mentally ill beings - all of us.

We paint black and white pictures of so many complex things reinforcing the illusion that there are "good" people and "bad" people.  We shy away from the truth that we are an amazing mixture of so many qualities, healthy and unhealthy.   There are good, solid reasons why some people get pulled towards or away from health.  I don't believe that there are any senseless acts.  We do the things we do for a reason.  Because we cannot go inside another person and live their life with them, we cannot know that person's reason for turning towards brutality, but we can gather up clues.  There is so much evidence that abused children, of which there are many, have a greater chance of moving towards unhealthy thoughts, attitudes and behaviors.  It's logical and yet I know people who adhere to labeling others "evil" regardless of the evidence of severe abuse from childhood onwards.

It is irresponsible to label another human being supernaturally evil.  It might even be irresponsible to label another person bad.  Call them mentally ill and you are hitting on the truth.  Part of the irresponsibility of calling others evil, especially calling children evil, is that they hear it and remember it and often label themselves using the same language and attitude.  Internalizing such a damaging label leads some of them to follow the path of mental illness.  My ex-boyfriend was labelled as a child for acting out when it was likely that he had been raped by his father.  His reaction was totally normal, but because he did not conform to the rules of social interaction at school and probably at home,  he was labelled "bad" and incorrigible.  People didn't know and yet they made a huge assumption.   He was kicked out of kindergarten and would remain a year behind his age group as he grew up.  This was the early stage of being stigmatized, which in turn led him to stigmatize himself.

The attitude I encountered with him during his abusive episodes I'm sure echoed the attitude and language of his father.  I was placed in the role of the scum of the earth and he in turn in the powerful position of the merciless judge.  I got to feel helpless and extremely vulnerable in the same way he felt as a child and adolescent with his father and family.  It was such an extreme split from the young man I knew and loved, a person who loved animals, children, nature, home.  A gentle, withdrawn person.  He would swing from being emotionally withdrawn to being sadistic.  And all this was the natural pattern for someone abused as a child whose illness was left untreated in a large part because the whole family's illnesses were left untreated.

I remember calling him evil once when he was emotionally torturing me.  It was as if he were possessed and the truth is he was possessed by the damage done in his past, not by the supernatural.  I reacted in a dire circumstance naturally too, but it was still wrong thinking because I, too, was mentally ill.  I think a part of him wanted me to label him just as so many others had.  It justified his behavior.  It confirmed that he was a hopeless cause, an unloveable person.  He had learned to push people's buttons in order to get that confirmation over and over again.

I had told him I would not leave him, kept trying to prove it to him, but he was sure in a kind of fatalistic way that I would eventually leave him.  And of course I did ultimately because that was what he wanted.  He had judged himself long before I knew him and could not tolerate someone trying to love him.  He set me up over and over again and I fell.  At first I told him he needed to get help.  When that didn't work I realized I needed to get help.  When he blocked me from getting the help, I knew I had to leave.  I would not follow what had been taught to him that I, too, was unloveable and should reject myself and follow him in his mental illness.

How many young men and women are there out there who have followed a similar path?  Who have looked at themselves and rejected their potential to grow and heal and love?  Add to that the horrible lure of becoming an addict of one sort or another.  Add to that, for many, the brand of being forever a convict.  Add to that abandoning their children.  Add to that living in poverty.  Too many are caught in this cycle of abuse.  Are they the "evil" people?  No, they are the abused, sick and abusive people.
From where they have come from a sense of love was repeatedly marred by sickness.  They make the mistake of joining love to sickness because that's what they have experienced.  I am not being condescending in any way when I say they don't know any better.  To risk being vulnerable enough to love is very frightening.  Imagine it from a child's perspective with one of his parents.  Children are dependent.  Too many children are put in life threatening situations.  Loving should be natural, very safe, very wholesome, but what is it for those who grow up in unnatural, unsafe and unwholesome environments?

Some of these people are called evil by people who consider themselves good because they have not fallen so low.  These "good" people don't say to themselves, "There but for fortune go I".   How good are people who judge and condemn from a stance of willing ignorance?  For those of you who have found yourselves taking on the role of an abuser, have committed murder or rape or have abused children, do not judge yourself for becoming seriously mentally ill.  Do not follow the so called "good" people who exaggerate mental illness into something supernaturally evil.  You are not evil.  You are sick and in desperate need of healing.  Reach out for help.  Start small, but keep reaching.  Find another person who practices being open and non judgmental to hear some of your story.  They are out there but you must choose wisely.  We live in a corrupted culture.  Many "good" people turn away from decency due to fear.  Don't judge them too harshly, but don't follow them either.  Follow the ones who want to recover and work at it daily.  A good group to follow are recovering addicts.  They've learned the hard way just as you have.  They can teach you the practice of rigorous honesty and self compassion.  You are worth the effort.  We all are.


Posted by Kate Waters Kiernan at 3:10 PM No comments: Once we were wild
We were the hunters in a pack
But the lone wolf is out there still
Howling at the moon
Hungry, isolated, but free.

Listen to his footsteps fall
Soft across the wild terrain
All the other animals steer clear.

He's zeroing in on the kill
He's picked his spot high on the hill
Where he can see the valley
Spreading down for miles.

He smells the pulse of the lame and the wounded
Following patiently a familiar trail
An easy path for the simple
Those lost or left by the herd.

He is close enough to taste the scent of victory
The prey is still unaware
The moment comes
He's on the run
The quarry taken by the neck.

Posted by Kate Waters Kiernan at 10:25 AM No comments:

The Tribe Of Trees

They all look at me
The many at the one.

I am a woman
Staring down the Major Oak tree
In Sherwood forest
Where Robin Hood slept
With his band of merry thieves.

Major Oak
The leader of the pack
With his sturdy tribe of trees
These living statues
These witnesses of the whole story.

They give no sound of dissent
As the breezes come and go.
Leaves fall, they sprout and bloom
From the sharp light green of Spring
Into a full blooded royal green of Summer
To the end of the dance--
Autumn's fireworks display
Of the final scene
As the cold wind moves in
Sprinkling the first snow flakes
That decorate the tree limbs
And make them into
A land of enchantment
By a pond
Three quarters mile
Past the road.
Posted by Kate Waters Kiernan at 12:15 PM No comments: