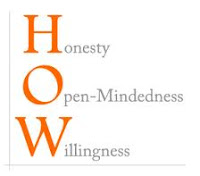 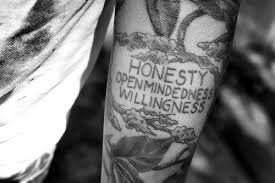 I have stated before that I believe that the entire human race is mentally ill to varying degrees.  Those that are brave enough to face the fact that they are addicts know from painful experience that they are mentally ill.  The only way to have that bravery is through the willingness to be honest.  Very few addicts come to embrace self honesty quickly.  First they repeat sick attitudes and behaviors each time expecting a positive outcome only to find themselves sinking lower.  The more they do this, the more insane they become, only they can't see it, which is the worst part of the insanity.  Lack of self-awareness has led to the death of many fine people caught in the grips of an addiction that has affected their spirits, minds, hearts and bodies.

Many people practice self-deception and deception of others.  Deceiving yourself is very tricky.  Rationalizations become more important than an adherence to truth about one's self and others.  When you rationalize and try to justify attitudes and behaviors that have repeatedly resulted in harm done to yourself and others, you condition yourself to live sealed inside an illusion that everything is okay and will be fine when your experience says the opposite.  That is one of the insanities of addiction.  Self-deception can be very compulsive when you are so afraid of the truth which you instinctively know will lead to the requirement to change yourself.  Even the thought of changing yourself can seem as serious as facing death, which figuratively is true - change requires the death of one way of being in order to embrace a new way of being.

Deceiving others is more straight forward:  you make a choice.  You decide that it would be more painful to tell the truth than to hide it or lie about it.  In choosing to consistently lie to others, you are also choosing to turn away from personal integrity.  You also become chained to the lies you create.  Instead of working to preserve honesty and integrity you shift into preserving dishonesty and a lack of integrity.  You become untrustworthy.  You waste precious time trying to remember and organize your lies.  Lies become your master instead of truth.  Instead of being open and willing to learn, you become closed and suspicious of the lessons.  Your true self becomes overtaken by your false self.  Yet another sign of insanity.

The false self is the self committed to the addiction or addictions; it is the Addict Self, the egoistic self, the self that lives dual lives or multiple lives, an inconsistent, untrustworthy self, a self that betrays itself every day it lives in active addiction.  It is also a sorely misguided self whose heart attaches to the subculture of active addicts.  Active addicts may think they are very loyal to their addict friends and lovers, but what they are really loyal to is the addictive process.  An addict world is a world of reward and punishment.  The bond amongst addicts is both the highs, the fixes they literally and figuratively crave, and the lows, the pains they endure through in their bodies when they don't get a fix, and in their spirits by sacrificing their integrity and thereby sacrificing their ability to love and care for themselves.

It's a very sticky web that gets woven and, because we are all human and sensitive, guilt and shame do enter into this addictive process.  The horrible thing is that it grows over time and the more there is of it, the greater the desperation to run away from it and deny it.  It becomes too overwhelming to face alone, which leads hardcore addicts back into the company of their addict community where the addiction continues.  The only way out is through an act of kindness to ourselves and that kindness comes when you allow yourself to be honest with yourself.  When you can admit that you are suffering because you are inside a no win situation, which is the addict world, and that you are powerless to approach the problems that are so overwhelming, you acknowledge the truth, you return to reality and discover humility.

The opposite of humility is arrogance.  Considering all the amazing things we human animals have accomplished over time using our intelligence, talents, skills, vision, hard work, etc... it is not surprising that many of us fall into the deception that we are greater than we actually are.  One of the greatest disservices to our species is the general denial that we are, in fact, mammalian animals caught in the cycle of life and death just as all living things on this planet are.  Many have lost awareness and respect for the power and beauty and harmony of the nature within us and around us.  Being caught up in egotistic orientations shrinks the world and sometimes pushes it out of view.  In the same way humans used to believe that the sun circled round the earth and that we were the center of the universe, we tend to view the world as if it circles around us.

We need the reminders of a star filled night sky, the expanse of Grand Canyon, the seemingly endless stretch of the ocean and sky.  We need nature to show us just how small and vulnerable we really are. The openness in nature can be reflected within the openness of our spirits which have the capacity to expand through a combination of the mind and the heart held in the balance of health.  Which type of person does your spirit expand with, the dishonest and arrogant or the honest and humble?  Thank the Powers That Be we humans have a natural almost childlike response to people who are open and honest and kindhearted.  Most of us can't help but to respond in kind.  That is the true nature in all of us shining out for anyone to see.  To be honest, open-minded and willing to believe in the basic good nature in all of us is the starting point for a path of spiritual self discovery.

Posted by Kate Waters Kiernan at 10:41 AM No comments: