Sitting With The Pain

First, Train In The Preliminaries 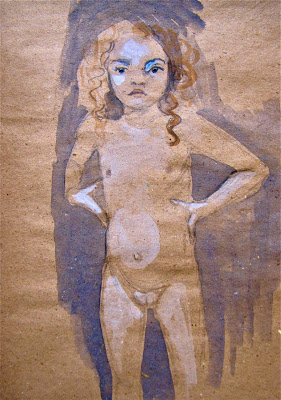 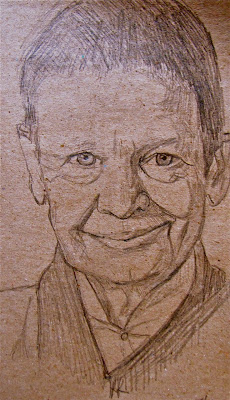 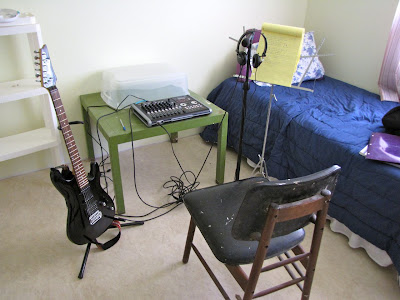 This is my music room downstairs, very stripped down, but functional. I've been creating a lot of songs lately, but I have to concentrate on just a couple and record them, maybe add extra vocals to harmonize and a minimal lead guitar track. I have a tendency to go around in circles when I sing and write songs, so I have to redirect myself into refining some of what I've done. The main thing is to touch base with singing and playing regularly throughout the week, even when my singing sounds like crap, just keep going, keep practicing. I bought a poster that has guitar chords on it which I'm going to post on the wall and seriously try to learn new chords. Because my guitar playing is so weak, I find using the electric guitar is easier on my fingers and sounds better than when I play my acoustic guitar. I'm just getting tired of using the same ten chords over and over. Before I got ill, I was a better singer and guitar player. I experimented more and pushed myself harder. So now I have another chance. My headset is different from the 1990s, which makes absolute sense, considering all I've been through since then. And so the music is different, but I still sometimes have the tendency to get dark. Usually I'm trying to mix the darkness with the light, alternating between the two. It's back to yin and yang. 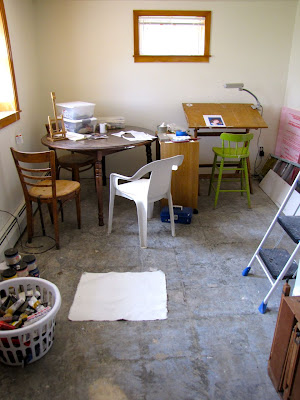 This is my art studio space. It's not very large, but it's mine and I can keep the cats out of the area when I need to work. I have yet to start a painting downstairs. I'm still adjusting to being able to actually go downstairs. But I need to christen it soon, turn on the music and get out the paints. I meant to start a few days ago, but I've been getting a toothache at night and that messed with my days. I've ordered a new bookcase to put in this room to house most of my art books. It will be very good to have easy access to the books again. 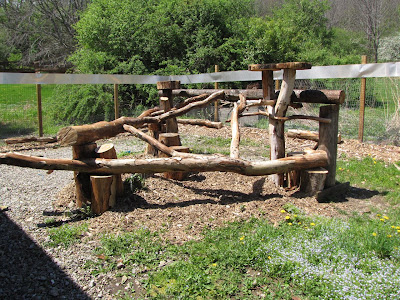 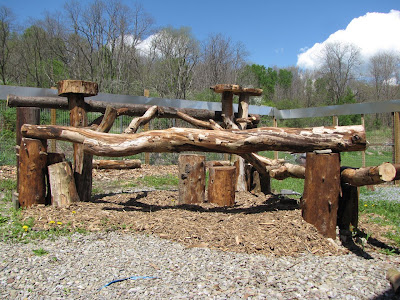 Here are a couple of shots of the cat pen/play area that Richard made. I let the cats out except for one, Shanti, who was nervous about the cat door. I will try again today in a couple of hours.
I let them out on my birthday. They were all very happy about it (except Shanti), but they were nervous too and didn't climb on the the wood or scratch it, not yet.
I did do a chunk of Spring Cleaning a week and a half ago. I rearranged my living room, which I haven't done in a long time. I bought an expensive vacuum cleaner meant to suck up pet hair. So far, so good, but I have really bad luck with vacuum cleaners. I have about four defunct ones in my garage. For a while there, I was afraid of getting electrocuted by the contraption. But with eight cats I have to one) vacuum and two) change the kitty litter boxes regularly.
I still have to clean the kitchen. I notice that I've left that till last, so that's a problem area for me. I have a dishwasher, but I haven't used it in years and I'm, once again, nervous about testing it and other machinery out. It's just foolishness on my part. I've become an on again, off again fearful person. It has to do with living alone, too. If I were living with other people, I'm sure more things would get dealt with. Me, alone, I put things off because I can get away with it.
My 48th birthday was this past Friday. Though I allowed myself to go off my diet for a few days by buying myself a pizza, wings and sweet fried dough, I didn't have a particularly good birthday. Letting the cats out was the highlight of the day. I chose my birthday to quit smoking cigarettes, which I had gradually starting smoking more and more of over the last couple of months. I haven't gone through withdrawal, which is great, but I am suffering through some depression. Today was my first up day in a few days. I put on music that my brother had given to me for my birthday: Bonnie Raitt, Red House Painters, Son Volt, The Waifs, My Morning Jacket, all of it good and there's more to go through of it. If I can put on some music each day, I can get some work done. It sets the mood. Sometimes I fall into periods of silence and that can be okay, but just not all the time.
I made a new online friend this week. It's Karen Sorensen who I put on my blog list a few weeks ago. Her blog is called Dignify Me. If you haven't already, please check out her blog. I love the way she writes and one day I made an offer of friendship to her, which she accepted and so we've been emailing each other nearly every day for the past week. She is smart and talented both as an artist and as a writer and she challenges me, especially in her blog, to think more deeply about my beliefs. I am very grateful to have this opportunity to develop a friendship with her. My tendency is to make some contact with others, but then to withdraw, but it feels different with Karen. We are different, which is a challenge and we are the same, which is a comfort. The combination works well for me and hopefully for her too.
Posted by Kate Waters Kiernan at 3:23 PM 1 comment: