From Sadomasochistic Abuse & Addiction To Getting The Help That You Deserve 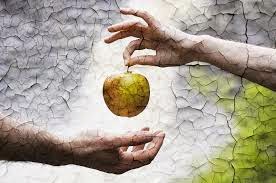 We ate the apple from the Tree of Knowledge a long, long, long time ago, at least according to our sense of time, which might be a split second in the greater scheme of things.  There are so many people calling out to God, crying "Why is our life this way?" and "Why must we feel so much pain?"
Too many of us want to point the finger at the Higher Power or at the other sentient species the Higher Power has chosen to help us on our sad, little world.  The Blame Game is the hallmark of practicing addicts.  It is too much sometimes to feel the depth of our own pain and so we try to shoot it out of ourselves at any available target be it friend, lover or foe.  In psychological terms that is called projection and anyone who has practiced it, which is basically everyone at one time or another, knows that it is a shallow sadistic pleasure to hurt others.  To hurt others is to hurt ourselves.  That is the real point in the cycle of self hating beliefs, practices and lifestyles - to hurt ourselves is to reject our true natures, to not believe that we started out in a completely innocent state, everyone of us.

Here is a quote from a book called SADOMASOCHISM: Etiology and Treatment by Susanne P. Schad-Somers:

"Sadomasochism, the confusion between love and hate, power and submission, is a uniquely human phenomenon.  It is one, though by no means the only one, of the inevitable products of man's prolonged dependency in early childhood, for dependency invariably mean inequality.  Since the human infant is born several years prematurely, physiological birth and psychological birth are roughly three years apart.  (italics mine)  During that time, the infant's emerging sense of self, and its external and internal reality are filtered through those of its mother's.  And what makes us human, and therefore unique, creative and capable of complex feelings and thought processes is the eventual resolution of the tension between the wish for symbiosis and the need for autonomy.  Only a perfect balance between holding on and letting go on the mother's part would permit complete separation and individuation--which is to say that it can never be fully attained.  What is more, for childhood to be free of lasting trauma, parents would have to be mind readers and utterly selfless.  Finally, since there is no such thing as a compromise between unequals, the subjective experience of oppression is therefore a universal part of childhood."   (Introduction, p. 11)

Because we are born prematurely, we endure three years of an unnatural dependence on our primary caretaker, often our mothers.  Being finite and fallible mammals on this planet earth, there is no way the primary caretaker could supply our needs to the point that we could reach a healthy balance between our inner and outer worlds, even in the most healthy of families.  We start out disadvantaged and totally dependent.  That is the core of our beginnings in this world.  As Ms. Schad-Somers writes, "the subjective experience of oppression is therefore a universal part of childhood."

And what of those who live in homes where abusive attitudes and behaviors towards children are the norm?  Emotional abuse and neglect, physical abuse and sexual abuse are sometimes all intertwined.  These abusive expressions and behaviors from adults often are the result of one of the many forms of addiction that permeate our culture and therefore are supported by our culture.  And how do babies get born into this world?  Through mature, healthy, balanced physical love between two partners of the opposite sex?  Not so often.  More often through couples conditioned to buy into the popular culture promotion of romance and relationship addiction which can lead right into sexual addiction.  Of the three often interlinking addictions here, sexual addiction is the most pernicious.

A sexual addict is at the mercy of an unnaturally amplified sexual drive/instinct.  Containment of the urges is possible in the early stages of the illness, but soon progresses to excessive attachment to getting the sexual fix be it through animal or child or the use of other adult bodies or the obsessive use of pornography.  It is no longer about choice and ethics--it is about disease overtaking the body and the human spirit.

And yet there is a choice, the choice to acknowledge the disease within yourself as a disease and stop getting hooked into the torment of shame and guilt.  If you were told you had cancer, would you avoid going to the doctor and getting treatment?  Not likely.  Sexual addiction is essentially no different, but it is such a stigmatized illness.  Another hallmark of using addicts is the commitment to living a dual life, a life of silence, of not saying plainly what it is that is hurting you, your life and those you care about.  And so there is another choice that must be made, that of whether to embrace deceit or embrace honesty, especially self honesty.  You cannot break the cycle of abuse and addiction unless you get honest with yourself first and preferably with another safe person.  Getting honest is turning your will over to the Higher Power and it can open doors to getting you the help that you need and deserve.

Posted by Kate Waters Kiernan at 10:49 PM No comments:

My First CD: Yin And Yang

This collection of music is from the early to mid 1990s during domestic violence, after domestic violence and in the beginning of psychosis.
Posted by Kate Waters Kiernan at 7:03 AM No comments:

I know that I made my choices
Walked the path towards the gates of hell.
I walked blindly like the fool
The fool that I was.
I was old enough to know better,
But I followed my sickness to the letter.

Sometimes depression lays me low
Takes me places I do not want to go
Down to the crossroads where I must decide
Whether to stay here or to give up and die.

Do I really have a choice?
I've said Thy will be done
On earth as it is in heaven.

God's will be done
I am joined by heaven to another person.
His suffering is greater than mine
But he fuels that fire all the time.

It's his turn to make the choice
That I made a long time ago
To give peace and love a chance
To grow.

Sometimes depression lays me low
Takes me places I do not want to go
Down to the crossroads
Where I must decide
Whether to stay here
Or to give up and die.

Here's a new song I just uploaded to SoundCloud.  It's called The Core

Years after he was born
With his eyes closed
He ate the apple from the Tree of Knowledge
Including the core.

When he opened his eyes
He covered his nakedness.
In shame and defeat,
Eden was no more.

Out in the darkness
Where the sun doesn't shine,
Where it's cold, dark and dirty
And he is quite blind.

So many people around him
It was hard to breath.
No one had all of the answers
And he fell to his knees.

He fell to his knees
And started to crawl.
He called out to God,
"What's the point of it all?"

Years after he was born
With his eyes closed
He ate the apple from the Tree of Knowledge
Including the core.
Posted by Kate Waters Kiernan at 1:03 PM No comments:

Posted by Kate Waters Kiernan at 9:16 PM No comments: